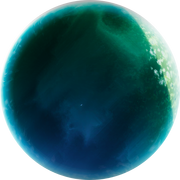 An image of the planet. The two dots in the center of the image is an accidental occurrence from taking the picture.

Petrichor V was the fan-name of the planet every stage is set in for Risk of Rain and Risk of Rain 2, gotten from one of the songs in the Soundtrack of the same name.

The devs have stated that they call the planet "The Planet", for simplicity and ease of access during discussions. However, the name had been confirmed to be the official name of the planet via the subtitle of Commencement.