The item grants charge on kill, and when full, fires a projectile dealing 300% damage, while also piercing enemies. Afterwards, it creates an explosion dealing 1000% damage, ending with the original projectile flying back towards the user, dealing 300% damage along the way. The initial launch and return of the disc have a Proc Coefficient of 1, whilst the explosion has a proc coefficient of 0 (cannot proc other items).

While holding the Resonance Disc kills generates 2.5 spin, visible by the dot in the model flying around. Spin decays over time. Every 1/60th of a second, Spin = previous spin - (1.25 * time since last kill in seconds). In short, the spin decays faster the longer time between kills.

Spin, in turn, generates charge. Charge does not decay. At 100% charge, the resonance disc checks all enemies within the blast radius of its nearest target to see if it can hit more enemies by targeting one of them instead. After selecting a target, it will fire according to the earlier description.

How much charge is generated from spin is dependent on time since the last kill, and the current spin used as a vertical velocity with -0.0125 gravity (so upwards). 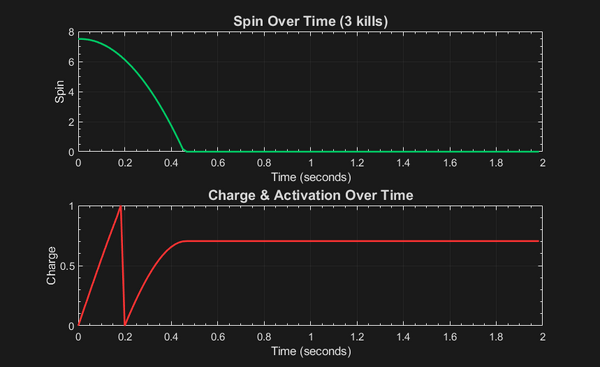 A minimum of 3 kills within 1/60th of a second is required to activate the disc immediately. The upper plot shows decay of the generated spin from 3 kills over 2 seconds. The lower plot shows the charge generated by spin, activating at 100% charge and maintaining its charge after spin decays.