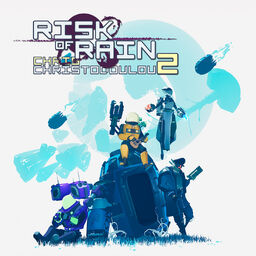 The soundtrack for Risk of Rain 2 was composed by Chris Christodoulou. It was first released as an Early Access OST before being fully released along the 1.0 update of the game on August 11th, 2020.

Along with the basic Risk of Rain leitmotif that is found throughout both soundtracks, a number of songs also borrow motifs from the first Risk of Rain soundtrack, or even other songs in RoR2: