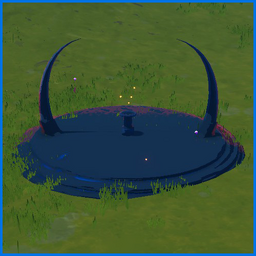 The Teleporter is a unique circular Interactible located in all main Environments. The orange particles it emits can be seen from a distance. Finding and activating the Teleporter are major objectives in each main stage.

The Teleporter allows you and your team to travel to the next Environment when fully charged.

There are about 12 set spawn zones for Teleporters on each Environment, though some may result in the Teleporter to be partially hidden in dark areas or even found clipping through terrain or objects.

Activating and completing a Teleporter Event is the primary mean of advancing the game.

After locating the one and only Teleporter in the stage, interacting with it will start the Teleporter Event. A message "You activated the Teleporter" appears. Multiple Monsters spawn immediately, along with the Teleporter Boss to defeat. A red dome appears, demarcating the effective area of the Teleporter, locking any Interactible outside its radius. The Teleporter begins to charge, indicated by the objective "Charge the Teleporter(% progress)".

Not to be confused with Bosses, a tier of Monsters

The Teleporter boss usually consists of one or several Bosses, depending on the difficulty and number of players. Occasionally, a Horde of Many will appear in place of the boss(es) upon activating the teleporter, spawning several Elite monsters instead, scaling with difficulty much like a standard boss.

The Primordial Teleporter is an Interactible located only in Sky Meadow. It has a distinctly different appearance from a regular Teleporter, featuring a spiral of eight flat, rectangular spires of escalating sizes that are bent inwards towards the center of the Teleporter's base.

The main function that differentiates the Primordial Teleporter from a regular one is that it can be interacted with to determine whether the player will travel to Commencement, or Loop back to the first stage.

When the spires are in their default state of a near-circular spiral, the Teleporter will be "aligned to the moon" and will send players to Commencement.

When the spires are shifted and rotate into two large clumps on opposite sides of each other that resemble the "horns" on a standard Teleporter, it will be "aligned to the planet" and will send the player back to the first stage.

Regardless of the Teleporter's alignment, using a Blue Portal will, after the Bazaar Between Time, send the player back to the first stage.

In multiplayer one item will drop per player, even for dead players.

The number of items dropped can be increased by completing a Challenge of the Mountain.

Multiple Orbs can be spawned on a single Teleporter, allowing for multiple Portals to spawn. However, players will only be able to use one of the Portals (or the Teleporter itself).

Players may still be able to activate a Portal after initially activating the Teleporter during the delay between actually being teleported, changing the course to the portal's target, instead of the teleporter's.

Challenge of the Mountain[edit | edit source]

Main article: Shrine of the Mountain

Upon activation of a Shrine of the Mountain, the difficulty of the Teleporter Event will be increased by the spawn of additional bosses and/or by turning bosses into elite versions of themselves. In counterpart, upon defeating all the bosses the players will be rewarded with an additional copy of each item dropped by the Teleporter.

A level can spawn up to five Shrines of the Mountain.